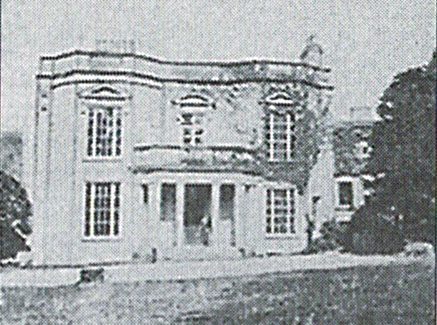 Ballinclea House stood between Bellevue Park and Roche’s Hill on the east side of Ballinclea Road, but was demolished during the 1950s. It was an attractive late-Georgian house, built about 1800, with double bows. These two-storey bows had gracious Wyatt windows which were ornamented with pediments, and there was a ballustraded parapet and a projecting porch with four pilasters. The house was built by the Talbot family who were descendants of John Malpas and they lived here until the 1930s. Ballinclea had a noted collection of paintings which were transferred to the main Talbot residence, Malahide Castle, when the house was sold. It was approached by an avenue of walnut trees and once also had a fine wood of beech trees, which were known as Talbot Woods, but these were cut down in the 1940s during the Emergency. The original entrance gates may still be seen, and the most unusual stable buildings, which are laid out in the shape of a horseshoe, have been converted into houses.

The lands of Ballinclea, or the Town of the Mountain, are first mentioned in the time of the Commonwealth. They were then forfeited lands, and had belonged to the owner of Loughlinstown, James Goodman, who had mortgaged them to his cousin, Rowland Goodman. The tithes were paid to the Cathedral of Christ Church, as they had, no doubt, been in medieval times to the Priory of the Holy Trinity. After the Restoration the lands, on which there were two houses and a population of nine Irish, were granted, amongst much other property, to the Duke of York, afterwards James II., and remained in his possession until his abdication. Some years after that event, in 1703, they were put up for auction by the trustees of the forfeited estates, and sold to Mr. Samuel Jackson. They became subsequently the property of Sir Oliver Crofton, Bart., whose baronetcy, conferred on an ancestor after the Restoration, became extinct on his death. Crofton was a rollicking blade, and did not bear the most immaculate character. In early life he had stood his trial for killing a man, one of the Massys of Duntrileague, in a duel, and his proceedings, after the death of his predecessor in the title, had not been to his credit. Attempts were made from time to time to induce people to build on the excellent sites which the lands of Ballinclea afforded, and finally Crofton came to live there himself. Loftus, whose lands adjoined, found Crofton a most unpleasant neighbour, and, on his boundary wall being thrown down by Crofton and his servants, sought, in 1765, the protection of the House of Commons. The House found that a breach of privilege had been committed, and some of Crofton’s servants, who had insulted Loftus, were taken into custody. The fine mansion which now stands on the lands was built, in the last century, by the Talbots of Malahide, and is still occupied by members of the family.

Extract from Some residents of Monkstown

Adjoining Loftus Hill, in a small house called Ballinclay, lives Sir Oliver Crofton, a baronet of not the most immaculate character. Loftus has found him anything but a pleasant neighbour. Last year he threw down their boundary wall, and Loftus had to seek the protection of the House of Commons on account of his conduct, and that of his servants- two of whom were taken into custody by the serjeant-at-arms. Some twenty-five years ago he stood his trial for killing Mr. John Massy, of Duntrileague, in a duel; and his proceedings after the death of his predecessor in the title did not raise his reputation.

BALLINTLEA [sic], near Killiney Hill. This place owned by or the residence of Rowland Goodman in 1590 was held in 1641 by the Goodmans, who forfeited it during the Commonwealth. Soon after 1660 it was granted to Jas., Duke of York, who in 1670 leased it for thirty-one years to Sir Wm. Domville. After James’s abdication, the lands of Ballintlea containing 40 a. arable were sold in 1703 to Samuel Jackson of Dublin (d. 1705), the tenant then being Terence Geoghegan. Jackson had, besides a nephew, Capt. Wm. Jackson, of Coleraine, Co. Derry, a brother Leonard, a clergyman in Lathom, Lancs., possibly father of Abagail and Jane Jackson, owners of Ballintlea. Abagail married first Wm. Buckley, of Buckley, Lancs., and secondly, in 1737, Sir Oliver Crofton (d. 1780), fifth and last Bt. Miles North, of Jackson’s Hall, Westmoreland, and Newtown Hall, Lancs., who succeeded as heir-at-Law to his cousin Lady Crofton’s estates, sold Ballintlea in 1785 to Cary Lill (widow of a Judge), who in 1792 sold it (containing 44 a. by survey of 1794) to the first Ld. Clonmell (d. or held part of Dalkey. In 1786 Mrs. Lill let for 999 years c. 27 a. of Ballintlea to John Coonan (d. 1807), who assigned his interest in the premises to Saml. Sproule, who conveyed them to Geo. Mellefont. In 1812 the second Ld. Clonmell sold . 13 a. of Ballintlea to Richd. Talbot, of Malahide, for the sole use of T.’s sister Elizt., whose first husband was Geo. Mellefont, of Ballintlea; he, in 1815, sold his brother-in-law, Sir John Talbot, the above-mentioned 27 a. for the same purpose. Possibly Elizth. willed the property to the Talbots. Sir John, who became a Prot. but returned to the Church, is ancestor of the heir-presumptive to the Irish Barony of Talbot of Malahide and of a Mr. T., now Arundel, who succeeded to the estate of the last Ld. Arundel of Wardour. Possibly a Ld. Clonmell sold the fee-simple of the remainder of Ballintlea. Ballintlea Ho., built probably before 1843 in the classical style and now flats, has a fine balustrade as a crowning feature; but the use of a hood moulding over the windows is not in keeping with the style. In 1854 it was occupied by the Hon. Richd. T. and c. 1919 by his daughter, a niece of Canon T. of St. Peter’s, Rome.

Records from Thom’s Directory & others