Killiney Obelisk has been the subject of much attention since it was built in the 1740s. It was intended as the centrepiece of a great undertaking to plant and landscape the hill, which at first was called Obelisk Hill, and more recently has become known as Killiney Hill. The obelisk was the main attraction of the lands of Mount Malpas or Scalpwilliam in the eighteenth century and visitors were brought by coach, on horseback or walked to the summit to admire the view.

In early times this area was included in the lands of Rochestown and Dalkey Commons and belonged for many centuries to the Norman family of Talbot (the same Talbot of Malahide Castle) and through them the property passed eventually to Colonel John Malpas who, in the early eighteenth century, built a brick house for himself at Rochestown.

It was Malpas who erected the distinctive, cone-shaped obelisk on Killiney Hill, as a marble plaque on it records: ‘last year being hard with the poor the walls around these hills and this etc. Erected by John Malpas June 1742’. This inscription is now very worn and hard to read — indeed, the obelisk itself is in need of general repair (note this comment was made in 1998 and a major restoration of the obelisk has been carried out in the meantime). Early engravings show a flight of steps leading up to a viewing balcony, but these were later removed for safety reasons. The winter of 1741-2 was known as ‘the hard frost’ and was a time of much poverty and suffering among the poor. Malpas was one of several landowners who carried out building projects in order to provide some employment.

A smaller structure, sometimes called Boucher’s obelisk (see below), lies partly hidden among the trees and rocks and may be contemporary with its larger parent. The inscription ‘Mount Malpas’ is to be found above the door, and though this was an eighteenth-century name for the park, it is difficult to date this monument with any certainty.

Robert Warren, who owned the estate for much of the nineteenth century, repaired the obelisk in 1840, and it is also possible that he was responsible for building the miniature obelisk and so-called ‘wishing stone’ or pyramid, which stands nearby. Warren was addicted to building, developing and improving his estate, and as we shall see he did so with the best of design and materials. For instance, he erected the elegant, granite-built, gate-lodge tower at Killiney Hill Road, and placed an inscription on it to record the date of its completion — 1853. The tall, ball-capped gate piers which grace this entrance were also probably erected during the eighteenth century, although the present gates are smaller and of a later date. This entrance was somewhat altered about ten years ago, when the derelict tea rooms which adjoined the gate lodge were removed. Warren also built the magical cut-granite archway and gate-lodge which is such a feature of Killiney village. The gateway, which is part of a small house once called Camelot, is surmounted by a castellated rampart which connects with a large circular tower and smaller lookout.

A similar cut-stone, octagonal gate lodge with crenellated gate piers and battlemented walls, was built for Killiney Castle at the Dalkey entrance and is still in use by the hotel.

In the park near the obelisk there are also a number of stone-built picnic tables which a nineteenth-century engraving shows in use, with a party of fashionably dressed Victorians enjoying an al fresco meal. Not far off in the woods are the remains of a pump house.

The Dun Laoghaire Rathdown County Council record of protected structures mentions Mount Mapas Obelisk and Monument (Boucher’s Monument), Killiney Hill Park. We believe that this refers to the smaller obelisk which is mentioned in Ball’s history which comments: ‘A tourist in 1796 mentions that a memorial was about to be placed on the hill, in pursuance of the will of the last Mr. Mapas, who left a large sum for the erection of a monument to his family.’ It appears that this work was carried out by Thomas Bourchier.

You can read more about Thomas Bourchier here. Thomas Bourchier, of Killiney Castle, County Dublin, was Clerk of the Crown and Hanaper and Usher of the Black Rod in the Irish House of Commons.

OBELISK ON KILLINEY HILL. Who is there living in Dublin, that has read the description of Killiney in our 113th Number, but has visited that delightful spot, so rife in fine views and pleasing prospects ? And who is there that has visited Killiney, and ascended its summit, that has not felt gratified and pleased at being allowed to rest his wearied limbs, after toiling up the hill, in the little reception room in the obelisk, which was some time since raised by Mr. Boucher, to commemorate nothing! but to point out to the stranger in search of the picturesque, a spot from which he can at once obtain, by merely turning on the pivot supplied by the heel of his shoe, some of the finest views of maritime and inland scenery to be met with in our island. ” Approaching from the Dublin side, and ascending the hill, a sudden view is gained of Killiney bay, with its glittering semicircle of water and smooth zone of sand sweeping round to Bray-head, from which the graceful cones of the greater and lesser Sugar-loaf, etherially tinted through the half dozen miles of intervening air, terminate the view. Turning round and looking along the coast, a scene of inexpressible richness, variety, and grandeur, bursts upon the eye : beneath is Kingstown, no longer the poor residence of fishermen, but a large town, or rather an infant city, built in the most ornamental style, and still enlarging into the dimensions of maturity : stretching away beyond its picturesque pier, the most splendid bay in Europe spreads for miles its vast and lake-like level, adorned with all imaginable objects that can animate and diversify: the towns and shining outlets-the piers, docks, batteries, beacons-the sail of every form, the darkening curve of steam, the cloud-like canopy of Dublin-and Howth,” Like leviathan afloat on the wave,” shutting in the bay at the distance of a dozen miles.” We give a representation of the obelisk, to remind the tourist to whom he is indebted for the comfortable seat which the room affords. We are induced also to present him with a view of Malpas Castle, the house of the Mr. Boucher, by whom the obelisk was erected. 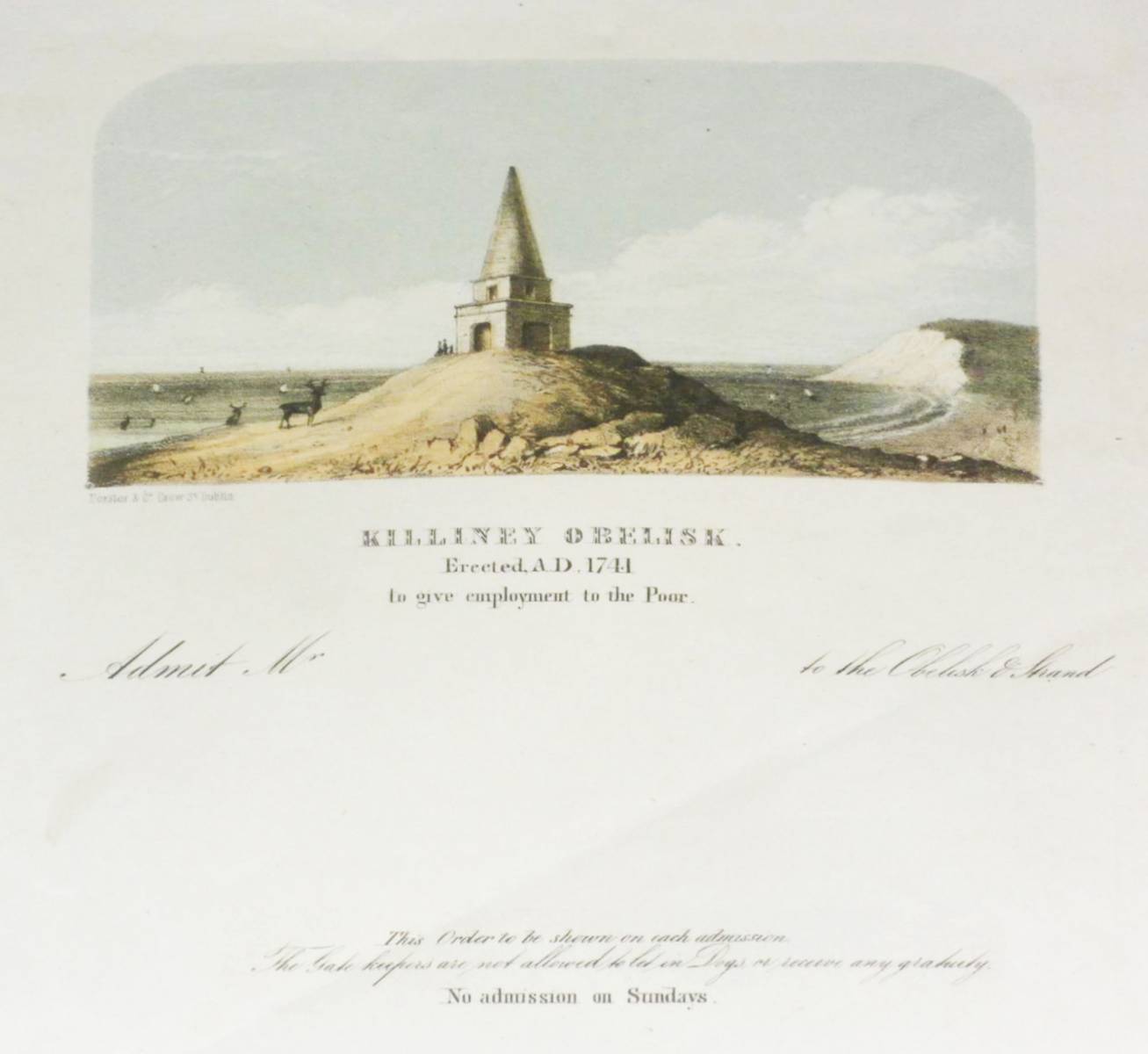 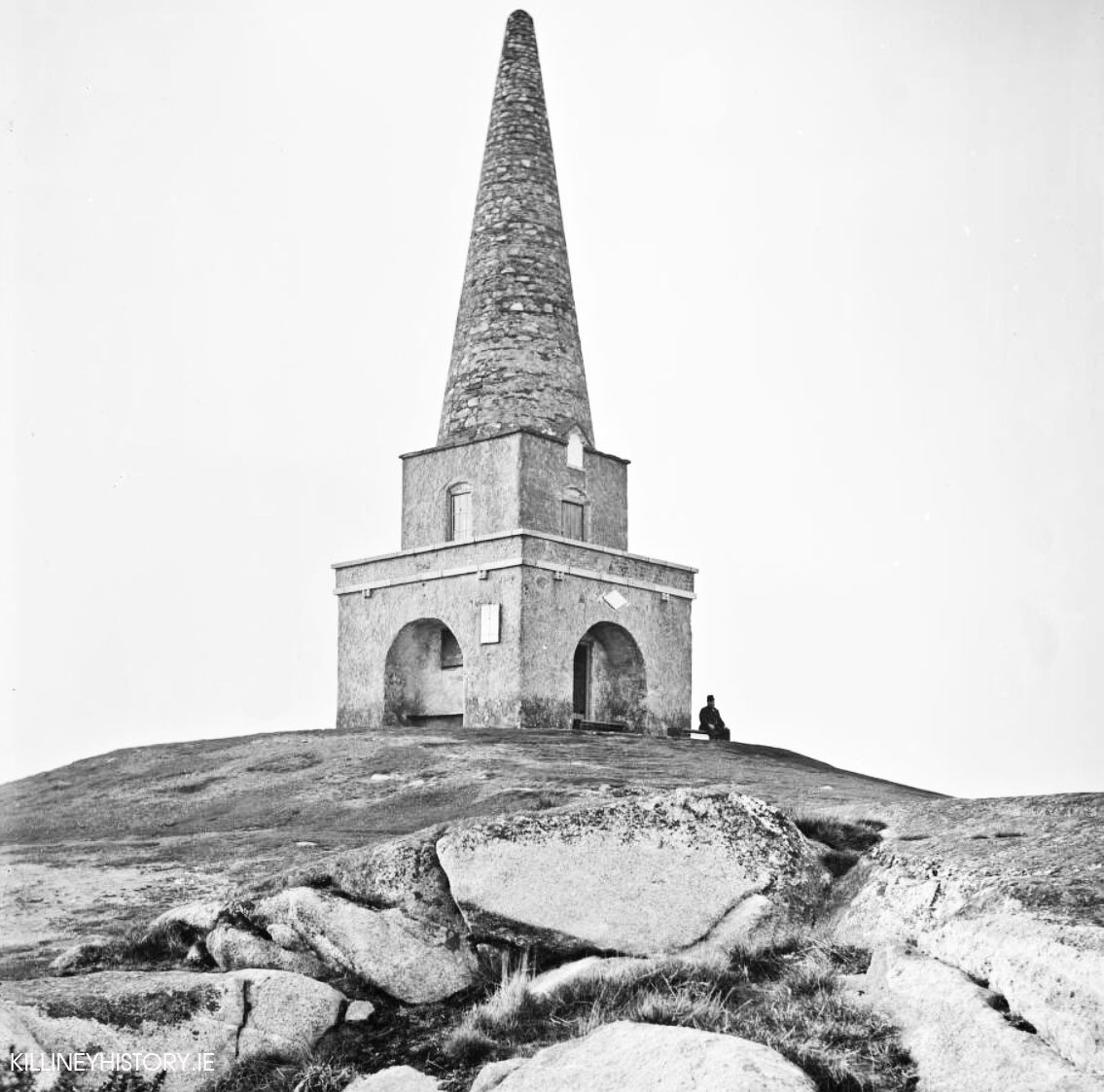 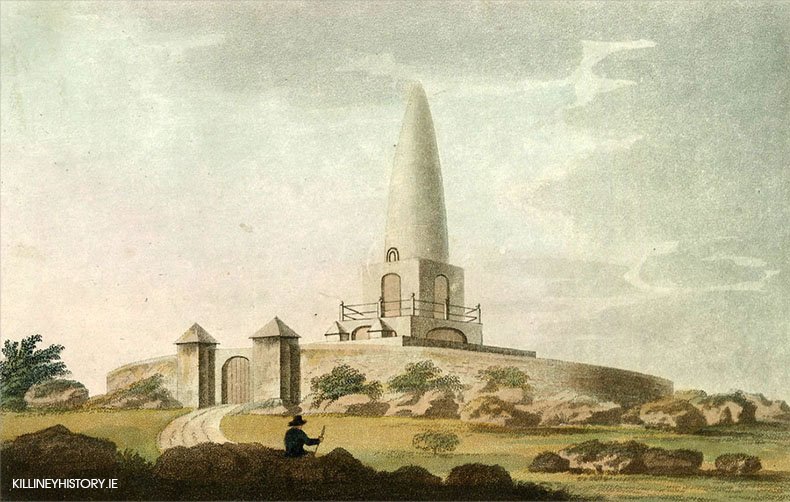 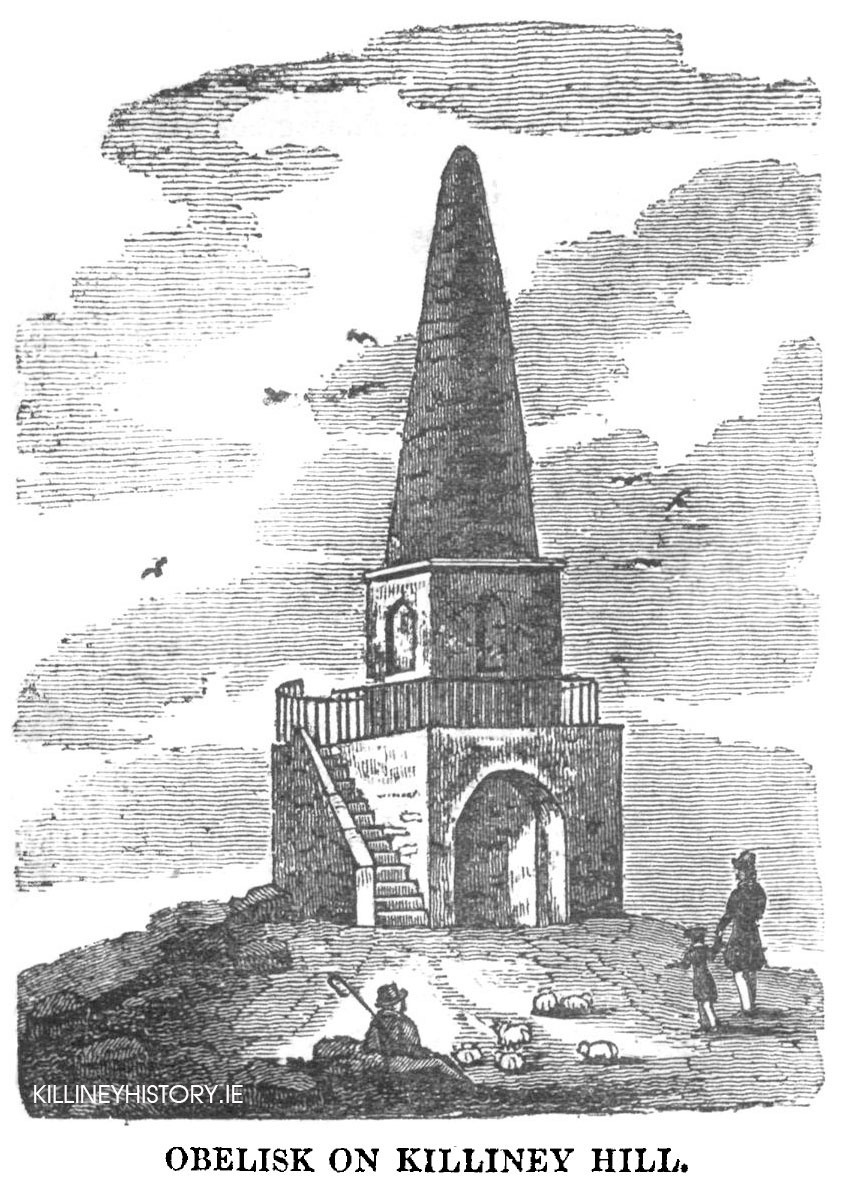 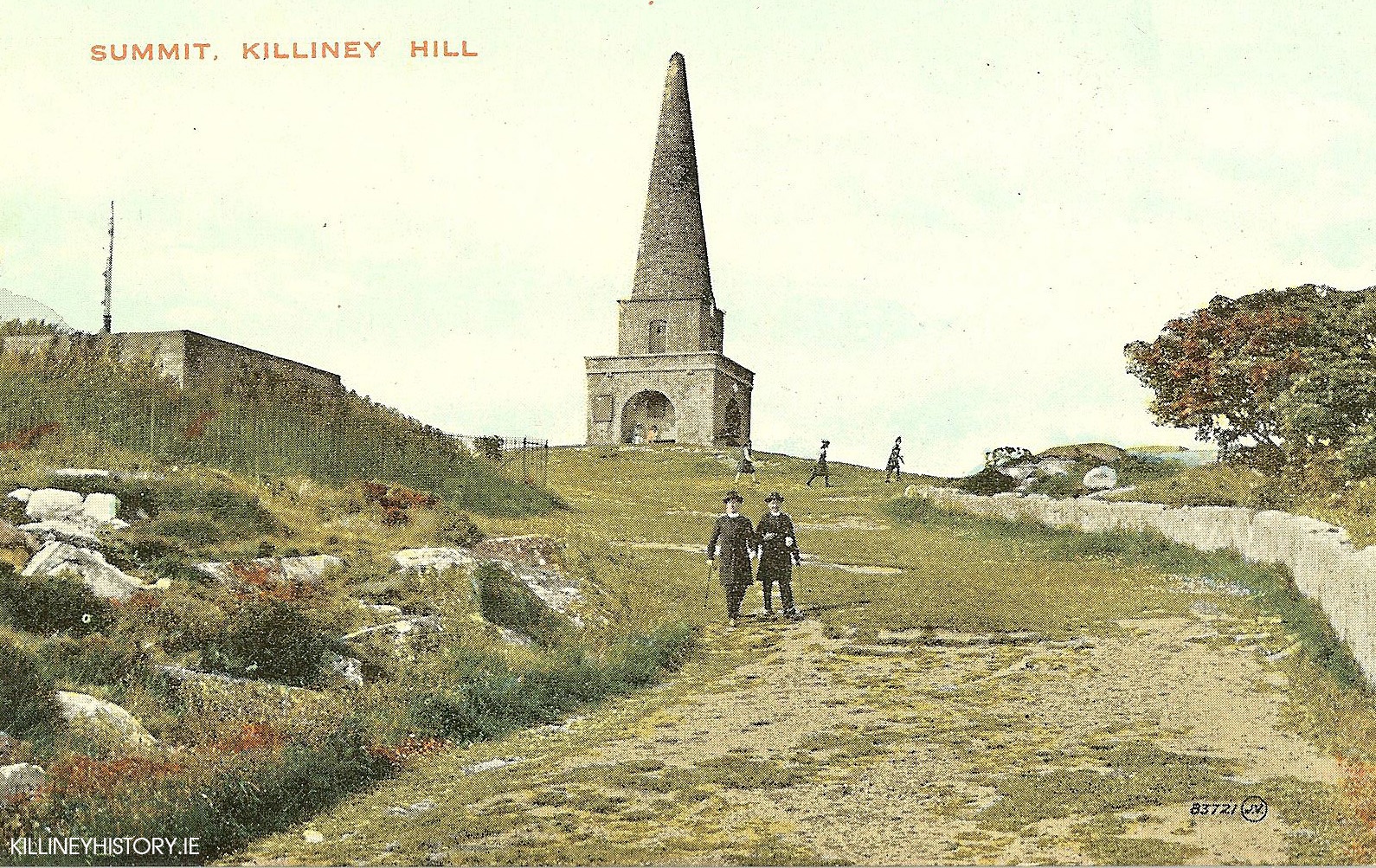 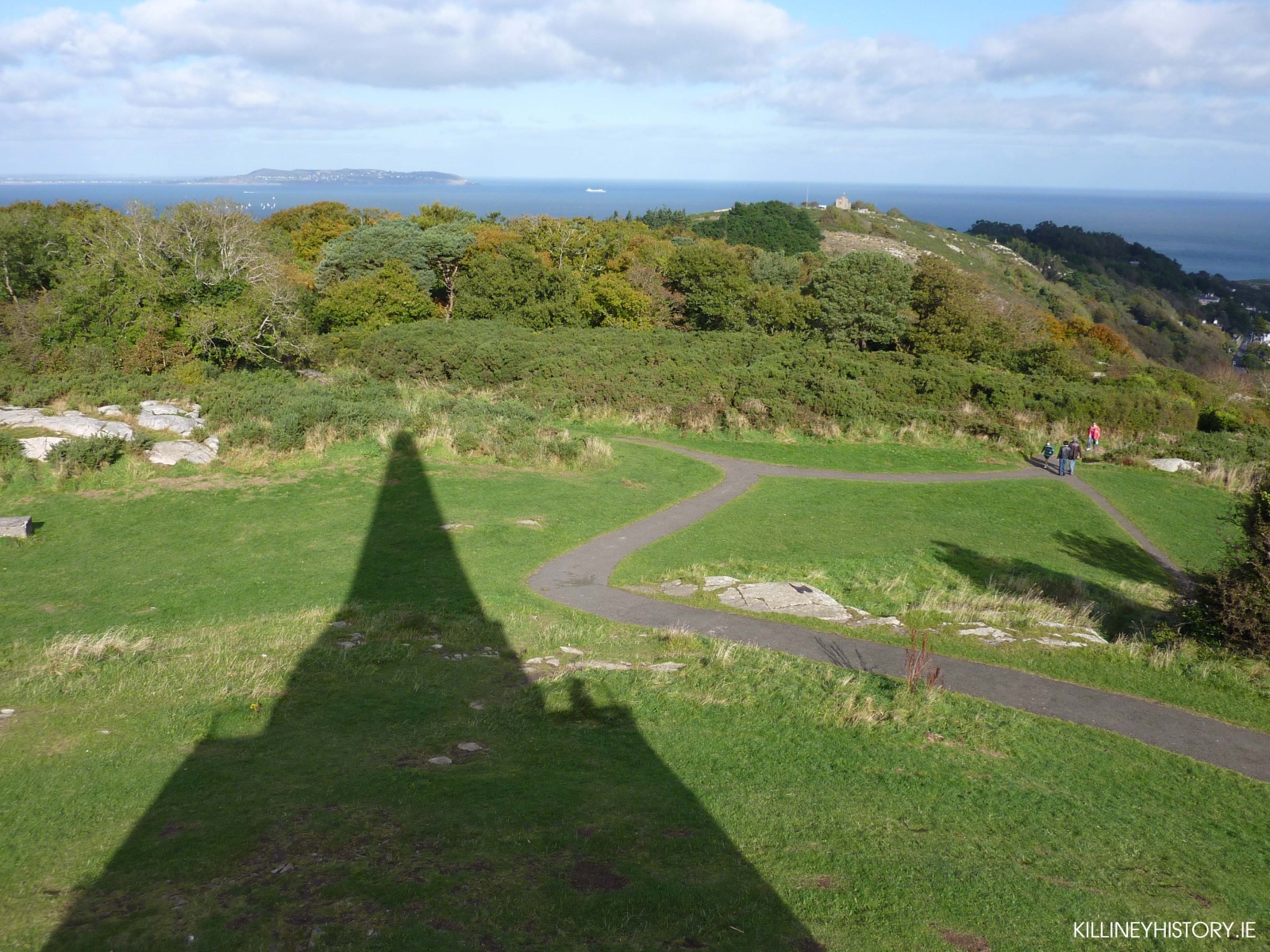 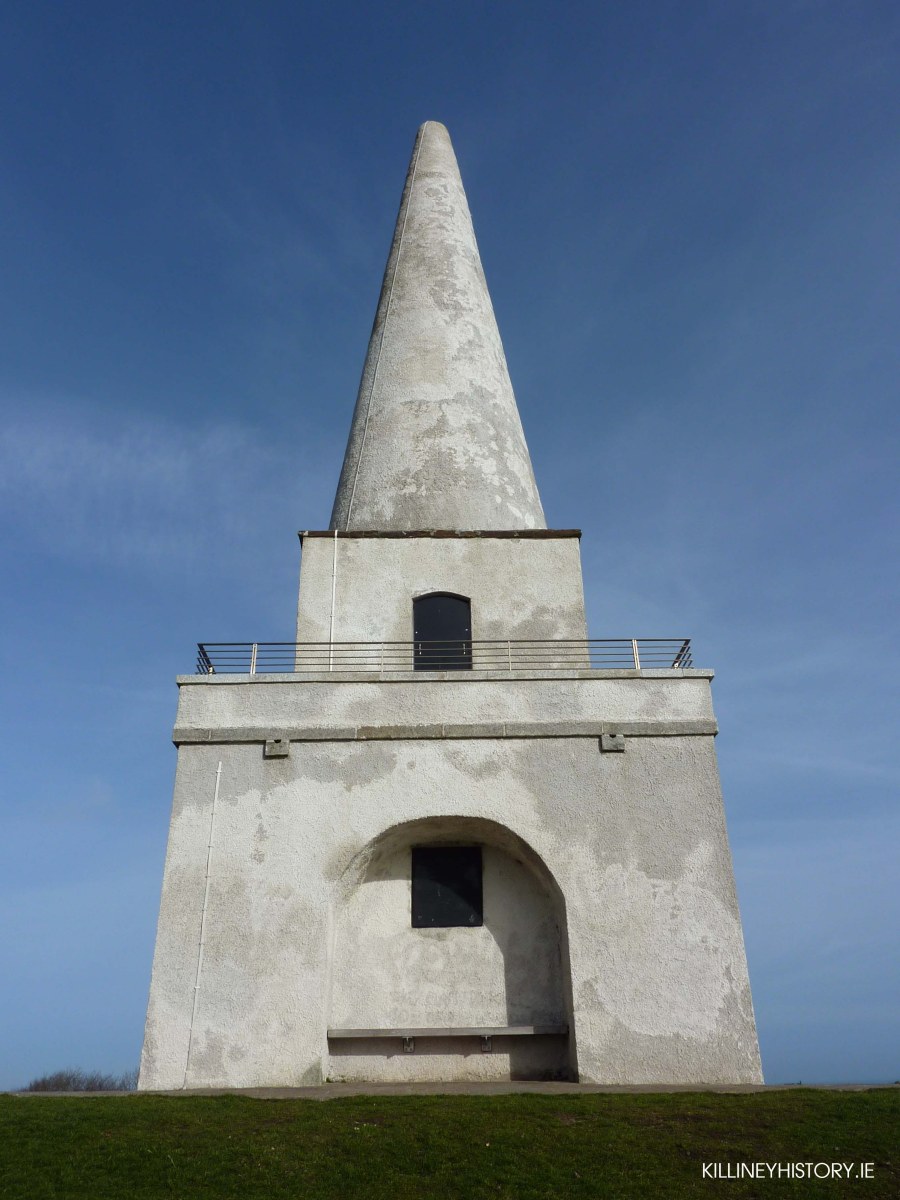 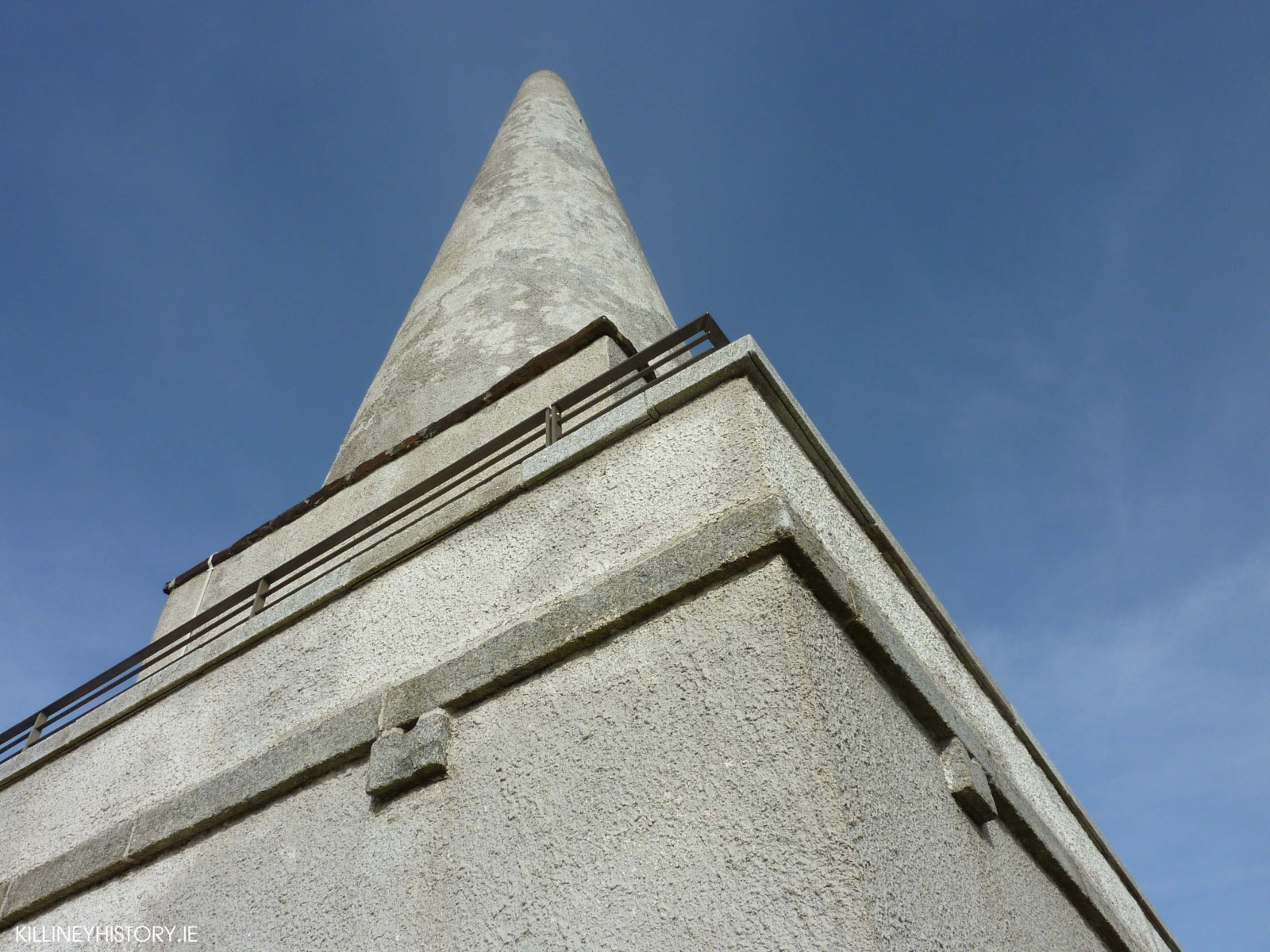