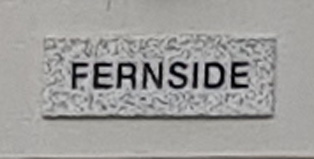 The description and photograph below are from ‘The Architecture of Deane and Woodward’ by Frederick O’Dwyer, 1997.

Robert Exham’s own Fernside was not begun until early in 1861. The Dublin Builder article indicated that the foundations had been laid out by 15 February. However, arrangements were clearly being made before Woodward’s final departure for the continent in mid-December 1860. Benjamin Patterson, Deane and Woodward’s quantity surveyor, records that he visited the site with Exham on 18 November 1860. Patterson marked out the boundaries of the house sites on 31 December. Tenders were invited for the houses on 8 January from Messrs Douglass, Cockburn, Millard and Beardwood. On the following day Patterson engaged Henry Madden to prepare the site and lay out the avenue, since the ‘houses were to be commenced immediately’. Patterson certified an interim payment to him on 14 February 1861. He had made copies, for tender purposes, of the bill of quantities for Exham’s house on 15 January 1861. The contract for the two houses was awarded to James Douglass, who also built Undercliffe. He was later to build Deane and Woodward’s church at Rathmichael, County Dublin. Fernside and Green Hill had been completed by May 1862 when they are referred to in an agreement made between Exham and John Shaw, a Belfast merchant. Undercliffe makes its first appearance in Thom’s Directory in the same year.

Robert Exham’s Fernside is larger than Undercliffe, having been extended within a decade or so of its erection by an addition at its northern end. It is basically a rectangle, but with numerous splays and set-backs reflected in an amazingly complex, yet turretless, roof line. The approach from a private avenue, which also serves Illerton and Green Hill, reveals a dramatic ascending series of roofs. There are corresponding changes of level on the first floor. The house is divided horizontally by a corridor and principal stairs, lit from the north. Accommodation on the entrance side is ancillary, the cloakrooms and back stairs requiring relatively low ceilings, while the principal reception rooms on the garden fronts push the bedroom floors up another half storey. The original of the two three-storeyed bows on the east elevation is rectangular at basement level, enabling french doors in the angles above to open onto balconies.

The Killiney houses are all finished in stucco or dash, with stepped brick arches, brick dressings and the occasional limestone shaft and carved capital. They are smaller in scale than the granite-faced villas of 1858 and lack the elaborate door frames and fretted balusters of the grand designs. Like the wood-work, the chimney-pieces were probably provided by the builder, rather than designed by the architects. Nevertheless, the geometrical planning and arrangement of the facades more than compensate for the loss of such trimmings. Woodward shows that he could create a successful design to suit a relatively tight budget. One recalls Rossetti’s comment that the ‘chief characteristics of Woodward’s genius as an architect were elevation and harmony in the whole’

The Workingmen of Killiney-petition for the release of Frank DuBédat, 1896